Device monitoring with smartphones and tablets 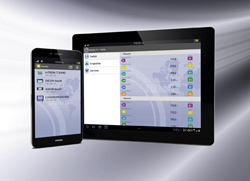 In the course of Industry 4.0, mobile communication is becoming more and more important. With the JUMO Device app, Android and Apple smartphones as well as tablets can now communicate with various JUMO devices. The JUMO Device app is available free of charge on the Apple iTunes Store and on Google Play. It is constantly being enhanced.

The JUMO Device app can visualize and monitor the new JUMO LOGOSCREEN 600 paperless recorder and, following software updates, also the multichannel measuring devices for liquid analysis in the JUMO AQUIS touch series as well as the JUMO mTRON T automation system. During development, heavy emphasis was placed on making the system as user-friendly as possible. For example, the intuitive operation concept reflects the design of the new JUMO LOGOSCREEN 600 paperless recorder.

The app can scan for devices in a company network and displays the discovered JUMO products in an easy-to-read list. Users can select the device either from this list or manually by entering the IP address / DNS designation. It is also possible to select according to the device type using filter functions.

If a JUMO device is selected via the app, the device tells the app which data can be used. This data could, for example, include lists of text images, events, or alarms.

In the case of a paperless recorder, therefore, all the configured groups with the relevant channels are shown in the group view. It is possible to access the names, process values, and units of all currently active groups and channels. Events or alarms are displayed with an icon, a description, and the date/time at which they occurred.

With its JUMO Device app, the company is taking another important step toward Industry 4.0.