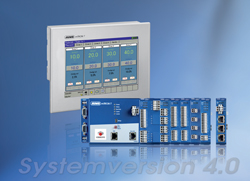 Since its market launch, the JUMO mTRON T scalable measuring, control, and automation system has been continuously expanded and adapted in line with customer requirements. The new system version 4.0 offers an impressive range of user-friendly improvements.

For example, the memory of the central processing unit is being extended to 128 MB at no extra cost. Thyristor power controllers from the JUMO TYA 200 series can now also be connected via a system bus. Various power controller process values can be accessed with the system bus.

The new JUMO digiLine system – an intelligent sensor network for liquid analysis – can also be integrated via Modbus. Depending on the bus topology and the voltage supply, up to 62 sensors can be connected to the measuring, control, and automation system. From a functional perspective, the sensors are incorporated into the measuring, control, and automation system via the integrated PLC.

An automatic user logout can be used to protect the system against unauthorized access. If a user is signed in and the function is active, an operation must be performed on the device within a configurable period of time for the user to remain signed in.

The expansion of the external text variables allow up to 90 external batch texts to be transferred. Other useful features in system version 4.0 include the improvement of the process screen editor and the option of CODESYS remote maintenance via TCP.