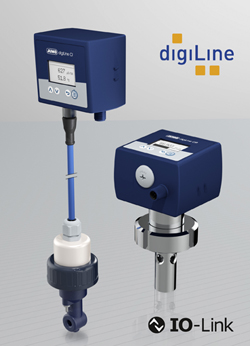 JUMO digiLine is the bus-compatible connection system for digital sensors in liquid analysis. The digiLine sensors for conductive (CR) and inductive (Ci) measurement of electrolytic conductivity are new to the range. A variant with an IO-Link interface is also available.

JUMO digiLine allows for operation of up to six digital sensors on the JUMO AQUIS touch S (P) transmitter or up to 62 on the JUMO mTRON T measurement, control, and automation system.

Consequently, both the operation of individual measuring points as well as the setup of extensive sensor networks is possible.

The conductivity measurement devices supplement the JUMO digiLine sensor range. Up until now it covered measurands for pH, redox, temperature, dissolved oxygen, turbidity, as well as water disinfection variables such as free chlorine.

The application area is universal. Versions are available for all water qualities ranging from ultrapure water in pharmaceutical/for injection (WFI) quality with conductance values from 0.05 µS/cm to measurands in highly concentrated liquids of up to 2,000 mS/cm. Tried-and-tested analog sensors in the hygienic or standard design type will be enhanced with JUMO's digiLine electronic components to become intelligent, smart sensors.

An RS485 interface with extended Modbus protocol serves as the digiLine interface. As a result, the sensors can be integrated into standard Modbus RTU networks.

The Modbus version will be made available at the same time as a digital version with IO-Link interface. This is the first electrolytic conductivity measurement anywhere in the automation industry that can be integrated in machines and plants with IO-Link infrastructure. JUMO has therefore developed a clear strategy for the expansion of the IO-Link sensor range. Sensors for temperature and pressure are already available.